This article will discuss the Primary Language Curriculum for Infants – 6th Class which was published in September 2019, and will provide some guidance in how to use and plan with it. 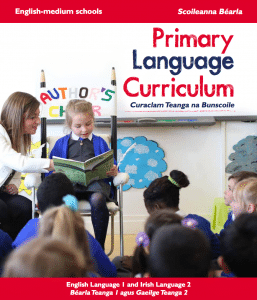 It seemed very daunting at first, but once I got my head around the terminology in the new curriculum, it became no more challenging than using 1999 curriculum.

For those who haven’t used the PLC before, below is a very simple explanation of the terminology that I used to help me transition from the 1999 curriculum in my planning and teaching: 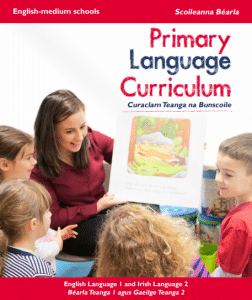 The Infants – Second Class part of 2015 Primary Language Curriculum was scheduled for full implementation in schools since the 2017/2018 school year. In September 2019, the curriculum was re-released along with Circular 0045/2019. Hard copies were sent to schools and is also available here.

The main Differences Between the 2015 and 2019 Versions

All of the fully editable Primary Language Curriculum sample plans on my website have been fully updated to reflect the above changes. I spent many weeks creating these plans which have been purchased and given 5-star reviews by hundreds of teachers so far. 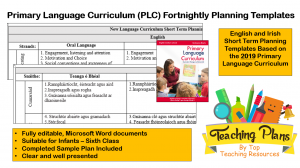 well as sample long term plans for English and Irish for all class levels here.

I also sell these plans as a bundle with plans for all of the other subjects at a discounted price for the class levels.

I hope that the above has been helpful in getting to grips with the changes to PLC. I put a huge amount of research, time and thought into the sample plans on this website, and I am confident that you will be satisfied if you do purchase one.

Best of luck with the return to school!

2 thoughts on “The 2019 Primary Language Curriculum: What You Should Know”

This website uses cookies to improve your experience while you navigate through the website. Out of these cookies, the cookies that are categorized as necessary are stored on your browser as they are essential for the working of basic functionalities of the website. We also use third-party cookies that help us analyze and understand how you use this website. These cookies will be stored in your browser only with your consent. You also have the option to opt-out of these cookies. But opting out of some of these cookies may have an effect on your browsing experience.
Necessary Always Enabled
Necessary cookies are absolutely essential for the website to function properly. This category only includes cookies that ensures basic functionalities and security features of the website. These cookies do not store any personal information.
Non-necessary
Any cookies that may not be particularly necessary for the website to function and is used specifically to collect user personal data via analytics, ads, other embedded contents are termed as non-necessary cookies. It is mandatory to procure user consent prior to running these cookies on your website.
SAVE & ACCEPT